My trip to my new home 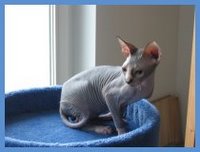 I knew something was happening the day before, when I went to the veterinarian, and he took a big needle and put a "chip" under my shoulder muscle. Whatever that is. My human breeder said it was so that I could be identified.

The next day, I was bathed, and my nails were clipped. Nothing too unusual, but I felt something weird was going to happen. Sure enough, two humans that I didn't know came to visit, and my breeder scooped me up, and handed me to the female human.

She seemed nice enough, petting me, but I didn't know her, and so I was shaking. My older sister Flappy seemed to like these new humans, and was purring away and wandering all over them.

The humans talked with my breeder, and she provided them with some paperwork, and some cat food (yum!), some litter and some toys. Pretty soon I was put into a carrier, and I only hoped I wasn't going to the vet again!

But no, I was brought to a car, when the female human kept me on her lap in the cage. I curled up in my fuzzy bed in the carrier, and went to sleep. 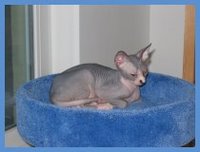 I slept through most of the drive. I didn't really know what to expect. Eventually, we stopped, and my carrier was picked up and brought into the house. I was put into a room, and my carrier door was opened. I meowed, since everything seemed strange, and I ran around the room, looking for my brother, my older sister, and the other cats. I couldn't find them.

The female human then picked me up, and put me in a litter box. It was different from the one I was used to, but had the same litter. So I knew it was a litter box. Then she showed me my water dish and food dish. Again, a little different, but the water was okay, and the food is what I've always eaten.

The humans have a nice cat tree, and they had a fuzzy fleece blanket on one of the platforms, so I hung out there for a while. Eventually I felt brave enough to play with the humans, chasing a feather on a string, and I then let them pet me. Later that evening, we all slept in the same room. I curled up next to the human female for a short time, and then went to sleep on the cat tree.

I miss my cat family, but I think I'll like it here.

That's funny I also have done a test blog but I try to keep it secret ! So each time I have time I try to change template and fumble around with colors. But so far it's not what I want. I am a little skeptic about "Beta" it's not yet up to date.

what a beautiful story!! I'm writing this to you on your first anniversary home!! Congratulations!