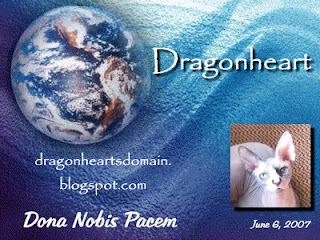 My human dad is an officer in the Canadian Forces. As such, he has participated in many different missions around the world, including serving during the first Gulf War, peacekeeping missions in Haiti, Bosnia, and Eritrea, and domestic operations such as the Winnipeg Floods in 1997. I am very proud of him and the work that he does, along with all the other members of the Canadian Forces, and all the other men and women who serve throughout the world.


To learn more about the Peace Globes and the Blog Blast for Peace, visit Mimi.

What a great sentiment, Dragonheart!

What a great sentiment

I love your peace globe. Thank you for your perspective on what is going on that we don't get to read about in the newspapers or see on the TV news. Peace and love to you and your Mom and especially to your Dad.

What a great post, and thank you for sharing with us the wonderful things your dad does. And what a lovely peace globe! Purrs to you, Dragonheart, and peace and snuggles.

That's a really nifty peace globe, Dragonheart! Thankies for sharin' that about your Daddy. He sounds like a great fella.

I am very proud of your dad, too! He does very important work. I like your peace globe.

I don't understand why the humans need troops and wars and all that. We cats know so much better. When we don't want another cat in our territory we just make ourselves as big as possible. Meouwing deeply, hissing and if absolutely necessary we have a short and loud catfight. The bigger cat wins (always me) and the other just leaves. Imagine cat troupes!
Your male human is very brave.

may peace be with you today and always

That is a great perspective. We salute your Dad for the work he does all over the world.
Peace to you and your Mommy and Daddy!

A very moving post... we totally agree. Peoples round the world should end their conflicts, so all those involved can go home.

It's true, you don't get to hear how servicement make a positive difference, and we're glad you reminded us.

we thank you for these thoughts.

Have a peaceful day!

Thank you for the reminder of other things the men and women in the service do. If beans wood only lissen to each other and unnerstand dat we reely aren't that different then peace wood reign and all our service men and woman could come home.

Great Globe Dragonheart your dad sounds like a great man you should be very proud of him :)

Your human dad probably does more for peace than most people. Peace to you and yours in Munchen, Dragonheart!!

we love the peace globe you made!
You dad is a great man. we are very proud of him

Being from the States- I don't often hear aobut our Northern neighbor's participation. Thanks for ther eminder tht this is even more global than we sometimes realize.
PEACE!

peace to you too! your globe is furry nice!

Peace to you our furriend!

May there be peace.

PS. We are proud of your daddy too.

Dragonheart, please tell your dad thank you for his service! We are excited to be seeing our Man in Green in just a few weeks!

We love your globe! Peace to you and your family!

You are right to be proud of your dad Dragonheart.We only hear about the headline news on the TV and in the newspapers. Thank you for telling us about all the good work that he and so many others are doing that we would not normally hear about. Peace to you and your family.

We like your globe. Please thank your dad for serving in the military and for all the good things he does around the world.

Peace to you handsome hairless kitty & thank you so very much to your daddy!

Peace to you, Dragonheart and we are furry proud of your human Dad, too!

The news does tend to focus on the bad. You are right to point out the good and kind things that people do for one another. That is peace. Peace to you and your family Dragonheart!

I love your post, and your globe. Peace, Dragonheart!

Hey, we're participating, too.
Peace for all kitties and humans :)

That is a great post. You must be very proud of your human Dad. Peace be with you and yours.

Wonderful post Dragonheart! Peace to you and yours!
Tara

Great peace globe, and great tribute to your dad. Canadian peacekeepers are great. It would be wonderful to hear more stories about some of the things your dad has done to help people in Afghanistan.

Hi Dragonheart. Thanks for bein' brave enough to come into my run. Not many cats come into a Rottweiler's run like that. You scare me, so I won't chase you.

My slave... ummmm, I mean my Mom [Imma (Alice)] is here wiff me and we bowff really likes your WW post. We's gonna put links on our blogs to send more peoples here. Weez Canadians too.

We hope some day, all those that are serving their countries and trying to protect us all will be able to come home and just live peacefully.

Peace to you and your Canadians...

My father was in the armed forcs when he was younger (we were posted to Germany at one point) and my son in law has served in Iraq...so many nations fighting for the cause of Peace.

Dragonheart, we reely appresheate all the hard werk yer daddy duz, and purray for peese so that he and all the other troops thruowt the werld will not be in harm's way.

Love your globe and words

You have a lovely peace globe and we wish peace to you all...

The man passed gas for the US Air Force for 20 years...I know he worries about all the people serving their countries, and just wants everything to be ok for them, too.

Sending uncountable "Thank you"s to your human dad for his service, from the bottom of our hearts, dragonheart - and of course, a huge "Thank you" to you for this amazing posting.

Sanni, Frank and Luis,
Jersey, the furry diva and
The Pimping Team

are wishing LOVE & PEACE to you and yours ♥

May the warmth and spirit of this Peace Globe Day bring us all peace. You’re globe is beautiful.

Bud
From WTIT: the most peaceful Tape Radio Station ever…

peace an' love, dragonheart, buddy! what a fine bean your daddy is, eh? we purrs an' purrrays for all the servicebeans, also--our daddy an' grandbeans wore unyforms, too.

FRIEDEN~PAX~PEACE....it all means love deep down for all your brothers.
America is lucky to have such a Peaceful neighbor in Canada....very lucky.
Luf Miss Peach >(^,^)<

What an excellent tribute to your father and everyone serving in the military. Peace to you and yours. :)

You should be proud as we are of all of them. I hope they all get to come home soon and will be able to find an inner peace. - LC

That is a great thing that your Dad and all the other soldiers are doing. Give your Dad a big kitty hug and gentle headbutt to thank him for his service!

Dragonheart, our world is a better place just having you as our friend! We wish you a peaceful, loving world, today and all days.

Everybody at Artsy Catsy

Thank you for spreading the word of peace around the blogosphere.

Sorry we're late. May peace be with you & yours x x x