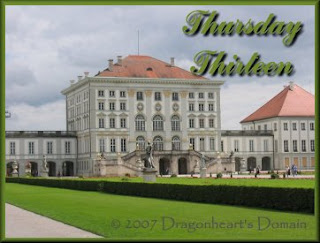 I live in the beautiful city of München (Munich), Deutschland (Germany), which is the capital of Bayern (Bavaria). Here are 13 things to see and do in Munich.

#23 - 13 Things to See and Do in Munich
References: Munich Tourist Office

ooohhh...mom remembers lots of those places from when she visited munich in the early 80s (mom's OLD!).

dachau was a harrowing experience. mom remembers the monument with the phrase 'Never Again'.

You live in a very interesting place! I would like to visit all of the gardens in my stroller. My Mommie wishes she could go to the Dachau concentration camp memorial site and pay her respects.

Munich looks like a lovely place! There are so many things that would be fun to see or do!

Hmm, I wonder if da area we live in is covered with parks because of all the early German settlers here? If yoo look at a map of Milwaukee and Wauwatosa it looks like we haf parks every 4 blocks!

Wow, what an amazing city Munich is. The girl human was very pleased to read this as she will be travelling regularly to Munich when her new job starts in September. FAZ

momma has been to munich several times and liked it very much.
Some of the places you described she's already seen, some not.

I would love to visit! thanks for sharing those pics - wonderful.

Oh.... Mommie wants to go back to Germany right now. She lived there as a little girl when her daddie worked for the State Dept.
Mommie please please, do not leave us!!!

Thank you Dragonheart for sharing these very interesting areas. Everyone needs to go and visit beautiful countries. This planet is so beautiful!

Thank you for sharing all those neat photos of your city. It looks very beautiful.

The photos and the information about Munich was very interesting. It looks a beautiful place.

Beautiful. I hope to visit some day. My father was stationed near there between the Korean and Vietnam Conflicts. He loved the people there. I have a lot of heritage there to. LC

Even though I am not a beer drinker (I will drink anything else though, lol) I loved Oktoberfest (I have been there once) and the Englischer Garten offers the most beautitiful scenario for a gepflegtes Bier, a nice beer :)
Happy TT!

sounds like you live in a furry interesting place!

Wow, those are some nice places to go. It is a very beautiful place. One day Mom wants to go there. Great T13.
Samantha & Tigger

P.S. Computer is still on the fritz, Mom's taking it back in a few minutes. Hopefully, she can bring it home with her.

Incredible! I can't believe how amazing it is where you live. I wish I could come and visit.

hubby grew up in Germany we are hoping to get there some day. Thanks for your list!

Wow, thats a lot of pretty buildings. Such an interesting place to live.

What a beautiful city! I'd love to visit someday. Thanks so much for sharing!

My TT is up...all about movies.

Living in Munich seems so much more interesting than living in Florida! All we have is BEEEG lizards and sharks.

I am doing great today, thank you for asking. I am beginning to "show" now!!!

Although I am a German cat I never was in Munich before. That seems to be a very nice place to be.

I've been to most of those--not the gardens, though. Maybe one of these days.

you live in a very nice place!

mm, those all look like wonderful places to visit. I want the palace. I dont mean I want to visit it, I mean I want it to be mine.

Oh what a beautiful city Munich is! Someday when I go Germany, I visit the places you spoken of :)

Happy TTs - have a good day

Oh! I am so printing this list! My husband and I are supposed to be visiting the Munich/Bavaria area at the end of October. As long as I can find some cheap airfare from Atlanta!

not the mama wants to visit now... esp for number ten!

Wow, yoo live in a furry interesting place, Dragonheart! Do yoo get to see all those places? I guess yoo can telerport to them if nuffin else.
Purrrrrrrrs,
Sanjee

Beautiful place! We are making mommy takes notes, so that when her health is better and she is more confident travelling again, she and daddy can go to Europe and visit Munich!

You're quite the tour guide, Dragonheart!

Excellent TT. I printed this out. It's always been a dream to visit Germany and now I have lots of ideas of where to go.

You live in a neat place, Dragonheart. Meowmie enjoyed reading about your town, because she was there in 1971. Can yew beleive anyone can ackshualy be that old?
~Maggie Mae

Wow what a lot of nice places to go and see! I'd love to go to Munich one day, that's on my list of things to see. You're lucky living in such an interesting place!

Auf weidersehen! (or something like that, haha German class in grade 9 was so long ago!)

Mommy's had several friends go to the Oktoberfest and they raved about it. She's hoping to make it there someday.

HEHEHE, sumthing tells us yer favurite is the Englischer Garten whare yoo can ware nothing and make stinkies while on the paths!

I lived in Germany when I was a child, and my parents wanted to make sure that even as children we visited Dachau. I think I was 9 or 10 years old at the time (25 years ago) and I can still remember the impact it made on me. I think it is something that will live with me for the rest of my life. It is a very powerful and moving place to visit.

Tara (not the cat)

Have you really visited all these wonderful places? Not just passing by running with your mom and dad?LOL;)

Wonderful post. I have not been to Munich since 1975 - on a 2 weeks media training course.

I was in München for a few days several years ago and really I found this town beautiful! So lovely memories in the englishen Garten, at the super stadium, I visited the zoo too and the restaurants...
You live in a marvelous place!