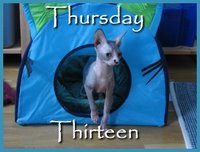 Monday, October 8th, Canadians celebrate Thanksgiving. In honour of this upcoming holiday, I bring you:

Update on me: I seem to be pretty much back to normal, except for soft, stinky trips to the litterbox. I took my last pill yesterday, and I go back to the vet tonight, so we'll see what she has to say, but I am eating and behaving normally. Thank you all for your prayers and purrs. They are very much appreciated!
Tags: Holidays, Thanksgiving, Canadian Thanksgiving, Thanksgiving in Canada,
at 01:48
Email ThisBlogThis!Share to TwitterShare to FacebookShare to Pinterest
Labels: Holidays

Dragonheart - where do you get all this stuff? You are such an educated cat with such an abundance of knowledge! Thank you for sharing this with us. Keep healthy
Karl

First, I'm happy to find my way back to your blog. I remember the cat. :-)

Second, thanks for the bit of history. I always wondered why the Canadian celebration was celebrated on a different day, but was too lazy to look it up. Thanks for clearing up the mystery.

If you like sci fi at all, I'll be doing a Sci Fi Octoberfest. Check out 13 reasons to join our sci fi Octoberfest 2007.

These are very great information, Happy ThanksGiving to you, too. I also like to thanks for your mommy and daddy have you, so I can know you. Thanks your daddy has been allergic to cats except Sphynx, so that I could know you~!!

These are all happy Thanks Giving~!!

Good to know your litterbox trip is doing well, have great result tonight~!!! I will continue purrrs for you~!

Oh I am so happy you are doing better brother dearest. A prayer is answered.
You made me hungrey for turkey now...it is my favorite meal and I just love Thanksgiving. Now I know more about Canadian Thanksgiving too!
Come by if you have time,I have tagged you for the desktop meme:)
Love Peachy

Oh I know one you've not added! :)
14. It's often my Mummy's Birthday on Canadian Thanksgiving and that's the real reason for the celebrating!

It's gotta be true as my Nana's Birthday is July 4th and all of America celebrate it with her! It's only right that Canada celebrate my Mummy's Birthday with her, 'specially as she lived there for 18 yrs! ;)

I never knew about Canadian Thanksgiving before. I hope you have a wonderful Thanksgiving, Dragonheart!

That was very interesting. We never knew anything about Canadian Thanksgiving before today.

When my Mommy was younger she always went to her friends house in Windsor to celebrate Canadian Thnaksgiving (she is originally from the Mitten state) - it was always fun! It was also like having 2 Thanksgivings!

Dear Dragonheart, mom has to change her settings because on her monitor, the right side of all your words are cut off. Please don't feel badly about this, mom would never hurt your feelings, she likes you too much. Mom has really bad eyes. If you take her glasses off, she couldn't drive and she could barely walk without help. I mean, she could see the BIG things, but the smaller ones, well, not so much. Mom picked you because you have so many interesting things on your blog and she thought your desktop might be the same.

PS Dragonheart. Auntie gives mom LOTS of grief because of mom's monitor settings, but mom just ignores her. Mom does like to be different at times.
Your list was very educational. Thank you very much. I love an educated cat.

Thanks for this story. I never knew any of this. I really enjoyed the history lesson. Have a great holiday!

Wow, great T13! It's always fun to learn how other countries celebrate their holidays. And we are so glad you are feeling better. Good luck at the Vet today.

We look forward to family being together,dinner and pumpkin pie with ice cream!(well Mom does)
I like the ice cream,I always get a little bit.

Happy Thankgiving to all the Canadians about. :)

Thanks for the info.

We hope you and your beans have a good time preparing for your Thanksgiving this week-end.

This is a wonderful TT about your Thanksgiving! Our brains are filled with knowledge!

<3<3 and Purrs
Caesar and Princess

Sigh...I'm pretty sure the LL is dying to be Canadian. Happy Thanksgiving!!

Happy Fanksgiving (early hehehe), Dragonheart!!! Fanks for the info bout yall's Fanksgiving too. I hope it goes grate at the v-e-t. Glad yoo's feelin better!
Purrrrrrrrrs,
Sanjee and the gang

I am's so happy you's are feelings better.

Thanks you for sharing about the Canadian Thanksgiving, it was interestings.

Dragonheart, we is glad you is feeling better. now that you're done wif the pills, hopefully you won't haf stinky poos anymore.

Gosh, you sure know lots of interesting things.

But I think the most important question is, are YOU getting a few bites of turkey? Oh, maybe not 'cause you're still recovering. Well, better luck next year!

As long as there pie!

We hope you have a furry wonderful Thanksgiving Day and you get some of the yummy foods.

Glad you're feelin better Dragonheart! (I hope your bum thingies are okay too, I don't know if I'd let a bean fiddle around back by spot #13...)

Thank you for educating us on the Canadian Thanksgiving Holiday! How interesting!

Glad yoor feeling better Dude! I suffer from skwishy, very stinky poops. Mom has done a lot of stuff to try to fix it but I think she is learning to live with it. Good luck at da vets...I think dey is gonna touch yoor spot #13 *shiver* be brave!~Speedy

Dragonheart, you are always broadening my horizons. Without you, what would I do about foreign policy?

Dragonheart we are so happy to hear that your are feeling well. Hopefully the trip to the v-e-t will be a good one.

It is very interesting to read about the origin of Canadian Thanksgiving. It seems like both Canadian and US thanksgiving are quite similar.

Wishing you and your family a bountiful and happy Thanksgiving.

Canadians are so much smarter than Amerikuns --- it's always a 3-day weekend for yoo! My FL is bummd she has to werk the day after owr Thanksgiving.

You and Daisy teach me so much...wow my head is filling up with knowledge.

I am sure glad that you are on the mend.

wow, what amazing facts! i saw a documentary about Frobisher a few months ago...it was very interesting...

we should have Thanksgiving in the UK too - we dont get nearly enough holidays!

We're glad to hear that things are getting back to normal for you. Hope the trip to the vet goes well. Enjoy the Thanksgiving weekend - don't eat too much like most beans tend to do. Thanks for sharing the information about Canadian Thanksgiving.

HAPPY THANKSGIVING, GUYS! Thanksgiving is our favorite holiday!!! Momma says maybe she'll marry a Canadian some day just so we can have two Thanksgivings.
Your buddy, Jimmy Joe

That's excellent; I didn't know Canadians had an official Thanksgiving. Nice that it hasn't lost its connection to its original roots (harvest festival).

The colleague who wrote our T13 today SPECIFICALLY mentions you in one item, by the way.

It is great you are better. MIttens is better too, most of the time, anyway.
Patches

I always learn something new when I visit. Thanks.

Yay! Thanksgiving this weekend! Turkey and a long weekend!

Dragonheart, I am glad you are feeling better.

Happy Thanksgiving, Dragonheart. I knew that Canadians had a Thanksgiving celebration, but I never knew much about it. I am glad that you are feeling better. I hope the vet visit went very well.

Those are some very interesting facts about Canada.

I need your help to make a decision - if you have time, come and take the poll at my blog? Thank you!
Karl

So glad you're okay, Dragonheart. And thanks for this very informative list about Canadian Thanksgiving.

Xanga eat my blog yesterday, so I am running late on everything. Oct. 8 is first day of hockey camp here, so all the Canadians will be working. They will give them American Thanksgiving off (my purrrthday!) and the booster club here will take them food and throw a big dinner for them. So I guess it makes up for it.

I am glad you are feeling better. Getting teeth cleaned is no fun.

Happy thanksgiving to you and your mom & dad!
Thanks for visiting my Tolkien TT.