While our humans are out running and biking, we are enjoying the wonderful snuggle sack that Queen Snickers and Empress sent us, that their mom made! 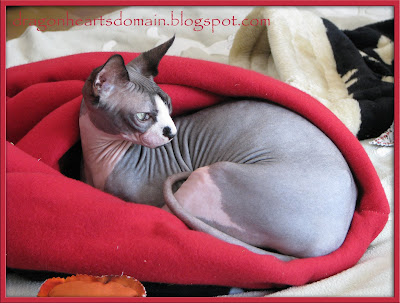 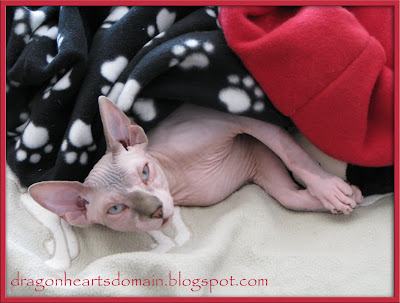 Some of you have asked about the weather in Munich. Usually it is quite nice, with summer temperatures in the mid-20s (Celcius) so 25-26°C (78-80°F) and reasonable humidity (50-60%). We generally have a couple of weeks of really hot weather (over 30°C or 90°F) and high humidity (80-100%). These really hot, humid weeks are nasty, since most German homes and businesses do not have air conditioning. The Germans don't "believe" in air conditioning and many consider it unhealthy. When our humans had a house hunting trip to find a place to live in Munich, our mom wanted a place with air conditioning, but they couldn't find one, because they don't exist! It is almost unheard of for a home to have air conditioning, and most hotels don't have air conditioning either. When our humans first moved to Germany and were waiting for their household effects to arrive (so they could move into their place) they were staying in hotels. Well, they arrived in the middle of a heat wave, and to find a hotel that had air conditioning, that still had rooms available, they had to go to a city North of Munich. Only a few hotels in Munich itself had air conditioning, and they were all booked up.

Our mom really suffers when it is very hot and humid, but sadly, we can't install any air conditioning unit in our home. Our windows don't open like North American windows - most German windows tilt open from the top or bottom, forming like a v-shape, or else they swing open like a door. Most windows don't have screens, so swinging them open like a door isn't an option (since we could escape). Our humans have installed fabric mesh in our windows, so that bugs don't fly inside, but we could easily get through the fabric mesh if we wanted to. So our humans generally just tilt the windows open to let air in.

There are stand alone air conditioning units available, but they all require a vent to the outside. They all have vent hoses that need to go through the walls, and vent to the outside (that's how the hot air is removed). Since our humans don't own our home (they are only renting since they are only in Germany for 4 years), they aren't allowed to cut holes in the walls for vents. The walls are also concrete, so it makes it really hard to cut holes in it, even if we were allowed (it also makes hanging things on the walls difficult!)

We are supposed to have really hot, humid weather all this week, so our mom will suffer. She does have a "cool air" unit for the bedroom - basically a fan that you put water and ice inside, and the air moves over the ice and provides some cooling that way. It's better than just a fan, but it's not as good as air conditioning.

So that's summer weather in Munich, at least since our humans moved here (summer 2006). Generally quite nice, but with a couple of weeks of nasty hot, humid, sticky weather. We already had one very hot, humid week at the end of May, and this coming week is supposed to be really hot and humid too. Then we'll probably have another week or two of the yucky weather in July and another in August, if this summer is similar to the past two summers.

my mom loves air conditioning.
She has allergies and needs it.
I feel very very sorry that you have to suffer there in germany.
Fans are okay.... dad's mom lived in Michigan and they had very hot weather and no a/c. Gramma used to sit in front of the fan all day with a squirt bottle.
Ugh, I am very sorry to hear this.
our beans hate summer heat

you two look snuggly in your sacks!

You boys look so comfy in your sacks.

Very few homes in New Zealand have air conditioning either, although where we live usually only gets up to 30 degree Cel a couple of days in the summer. Luckily I am allowed outside, so in the summer doors and windows are wide open.

We don't have AC either, but we open all the windows and get a lovely 'through' draft. We don't have too much hot weather though :O)

Our mom gets sick when it gets too hot & humid too. Hopefully the hot time will be short and enjoyable weather follows.

We cannot imagine no A/C, either. Ours runs almost year-round, because it's almost always hot here. I prefer cooler weather.

That is what our summers are like. We only get a couple of weeks of humid weather (feels like forever) We do have an A/C though :)
Your snuggle looks very cozy! I like the colour too :)
Purrs Mickey

No airconditioning! I think we'll faint awound here because we have those howwid hot and humid weather the whole year wound!

Your snuggle sack is really comfy looking and we love seeing you two enjoying it so much! Our Momma really suffers when it gets hot out too, and can't imagine being without A/C. Daddy on the other hand is weird and likes hot weather! We wish we could send you over a magic A/C unit that didn't require a window or venting ... We hope the hot spells don't last too long.
Purrs and headbutts,
Sabrina, Sam and Simon

My mom is in great sympathy with your mom regarding the A/C. Living in Texas makes it a requisite of survival, in her estimation. When in Italy, she had one particular hotel room with just the sort of A/C you describe, exterior vent and all. It did not cool very well, but, coupled with exhaustion, enable her to sleep, at least.

You fella's look so snuggly in your sleep sacks. My mom imagines that you are very snuggly to sleep with, as well, without the fur-up-the-nose effect I have.

hi guys, glad to see you again:) we're happy to find you both in great sunday snuggles;)

living without A/C? wow...in here where hot & high humidity with noise & air pollution, we have that without A/C, and sometimes makes us soo tired & exhausted, and our mommy often feel her brain is like going to melt like a candle....

I think napping and relaxing is a much better idea than running or biking!

I hope it doesn't get too uncomfortable this week with no a/c!

"The Germans don't "believe" in air conditioning and many consider it unhealthy." Haha, I am probably the typical German! I hate ACs. And although we live in Egypt I really didn't want one. I better carry the 33C we currently have in our living room with 3 running fans.

We hate it when it gets real real hot here too. The main bedroom is in the hottest area of the house. Fortunately it's only really hot for a few weeks. Lots of people here have air conditioning though, but it seems like a waste for such a short time.

You can always come visit us--no matter how hot it is we have one are of the house that never gets really warm!

OMG, Dragonheart! The pitchur of yoo on yur Catster page shows yoo in a tent from Ikea. I know its from Ikea cuz Friday Mommy bot me THE EXACT SAME TENT!!! Wow, how neet!

Now if I kood only send yoo sum of our air condishuning. After reeding yur post about humidity I can confidently say Mommy will nefurr efurr move us thare.

In da apartment where Da Mom livd with Smudgie she had a portible AC in the bedroom, she ducted it out a windo usin a piese of thin plywood with a hole fur the hoze. She duct taped the bord into da windo to hold it ther till fall. It was one of doze wined it open windowz.

We live in Malaysia with no air conditioning. Guess it's a European thing not to like that blast of cold air :-)

There's tricks to opening and closing windows and doors to get cool drafts all day. What you open where and when depends on how your house is (like Feng Shui sort of) If you're not used to living without air con, and can't think of what I mean, ask one of your German neighbours to tell you about getting the best of breezes for your house. You know how they love telling people what to do, hehehe

We're at 34C at the moment and it's super sticky as it's high summer. Now waiting for forest burners to start their annual (illegal) clearing by slash and burn - and then we'll all be coughing!

Meow from Malaysia and have a good week...

It is probably quite pleasant in Germany. Maybe a bit warmer than Holland which my mom visits often to see family. It was 99 here in TX today!
--JB

Mum remembers as a little thing living in houses with no AC. It was hard to sleep and all, so she knows how bad it can be. Hang in there!

Thanks for the weather info. My mom and your mom are alike in regards to melting in the hot, humid weather. My mom feels for your mom about the no a/c. That is interesting that the Germans don't believe in it. Mom is shaking her head. Hope it isn't as bed as it's supposed to be.

Thank you for such an informative post! It's so nice to hear about everyday things that are going on that are different from our own world. You told us more in one post than Mom learned from her former boss who lives in Munich and she worked for him for over two years!
Hmmm. Da lack of air condishunin Gives da beans somefin to consider when someday day go bisiting Europe.

oh dear. that sounds awful for your mommy. we hope the hot weather ends soon.
you two look so snuggly and cute there!

PS we didnt know a fav movie of yours is Jesus Christ Superstar! That is one of mommy's faves too. That movie is where her parents went on their first date and when they came to town a few years ago (with the original Judas actor) mommy and daddy went to see it on stage!

It has been very hot here too! It must be nice not having a big hairy fur coat during this time of year.Cosmetic Dentist London

Wow, we are definatly NOT gonna move ta Germany. We LOVE our A/C!!!