On Tuesday, something very weird started to happen. White stuff started falling from the sky! I was totally entranced by this! I wondered what was going on. My humans explained to me that the white stuff was snow, and that it was very cold, so that I probably wouldn't like it. 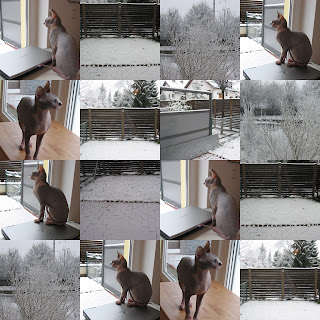 I was very curious about this white stuff called snow, and so my mom put my harness on, and opened the patio door, so I could have a sniff. I didn't like it very much. It was cold, and I don't like cold! 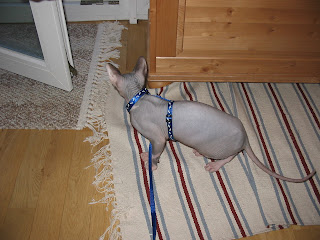 On Wednesday, the white stuff continued to fall from the sky, and I continued to watch it fall down, in between play times and naps. 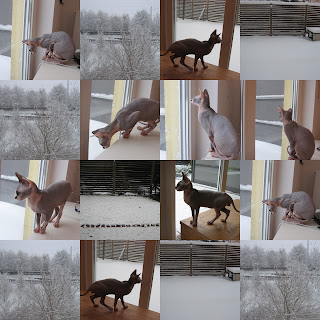 (Click the collage for a larger image)
I must say that it looks pretty, but I wouldn't want to go outside with all this white, cold stuff on the ground. I have decided that I like to watch this snow when it's falling down, but I have no interest in exploring it any closer. I'll stay inside where it's nice and warm, curled up on a warm lap or cozy in my sleeping bag or under a blanket. 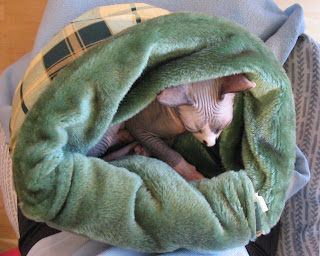 Dragonheart - you look very sweet & thoughtful watching it snow. We are glad that we don't get much snow here. It is too cold & wet. Stay warm.

I fink yu has the right ider...get all cuddled up in yur blankies and watch the white stuffs from yur window.

You are a smart kitty, Dragonheart. Look, but don't touch! Dazey escaped the other day and the MTLH had to chase her...in her slippers!!! Don't tell her we told you!

You look so snuggly and warm! My gosh, that snow looks pretty but it does look very cold too. I have never really seen snow either but its supposed to snow here today.

Luf yur sleepin bag. It looks efer so soft and snuggly. Wow. Yep, snow is cold. Not gud for Dragonheart who doesn't have any fur!!!
Luf, Us

Wow, look at you in your harness! Very handsome. You have a very nice sleeping bag. I got home today, and I am sleeping in my sleeping bag too!

I think you've picked the appropriate choice Dragonheart. It's cold out there with the snow.

Heh, yoor smarter than Zippy (don't tell her I said dat) she goz out inna snow alla time! We like to stay in where it is warm - just like yoo. Yoo do look furry deep in thot looking out at da snows.~Sadie

At least you got a close up look at it so you know you don't want to mess with that stuff. Enjoy it from the window., that's what we recommend too.

stay inside little puddin! you might freeze out there!

those are especially nice pictures put together from bits!

dragonheart,
do u hav a snow soot fer goin owt in da snow? an do u hav sum bootz?
jus wunderin.

snow definately looks more fun than it feels! especially when you don't have much fur on. it is better so be snuggly watching it through the window in your blankie.
Your mommy must be really nice to take you out on your harness. Beans as a general rule dont' like cold snow either!

I hope you have a warm, fun, entertaining day.
These are great pictures of you.

Now that last picture: that's what I'm talking about! You look soooo cute all cuddlied up like that!
Great snow pics with you in it! Your beans are great photographers!

Our 19th Thursday Thirteen is up today @
Purrchance To Dream

Getting a breath of fresh air is one thing, but going out in the snow..especially for a guy with no fur...NO WAY! Maybe you could ask for a cool jacket like our friend Skeezix has, then you could step out for a few minutes and not freeze!

I wonder why Dragonheart doesn't like cold? Oh, yeah, I guess it must be the no-fur thing. Seriously, a cute cat.

I'm pretty sure that if I were bald and beautiful like you, I'd get cold just watching it snow!

OOOOH! I've never seen snow - in fact only my daddy has ever seen snow. But mom and dad are talking about movin to a city where it will snow every winter - I'm a little furried about it.

we wouldn't have gone out in it either. you got the right idea cuddling in that blankie.

Stay inside and stay warm Dragonheart.

Dragonheart, I will show your photos to my Spice Cats. I am sure they will be very envious of you as we do not have snow in Malaysia.

A Sphynx belongs in warm places only! Leave the snow for Maine Coons or Norwegian Forest cats that have lots of fur. Just get a piece of fleece and a soft lap and enjoy the view...

Nice pictures, wish our mommie would have been able to take pictures of our first snow, she hid the camera from herself, silly beans.

I don't like snow either, fun to look at, but from a distance. Very nice collage of pictures!

Yoo got the rooteen down pat!! Enjoy the "snow" frum a distance...grate job!

You look so cute checking that white stuff out - all your pictures are darling, but that last one looks so warm and snuggly!

An adventure for you ! Can understand that you don't like snow, me either. But you should put your little red sweater on when you go outside ! You look very elegant with your harness ! My very first cat Piccola used to go with me everywhere, even shopping and she had a red harness.
I really thought you would have had more snow, because yesterday evening it looked quite bad on german TV.
BTW, Arthur and his sisters became Aristocrates and they are not ordinary cats anymore. Just have a look !

Your first snow!! How exciting!!! Well, you look very pretty there! :)

Dragonheart, I think the warm binky on the lap is the best place! Winter is terribly cold, so I think your human's lap is best! That is where I like best!

You made the right choice, Dragonheart, it's certainly not worth trekking out into!