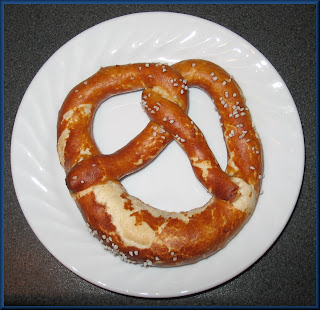 This is a photo of one of the traditional specialties here in Bayern (Bavaria) - a Breze. Brezen are Bavarian pretzels - salty and crusty on the outside, soft on the inside. You can buy them at local bakeries (there is one on nearly every street corner in Munich) as well as from stalls during Oktoberfest and at the Christmas markets.

Breze, pronounced "Bray-tse", is the German word for the tasty traditional bread shaped into a pretzel form. The plural form is Brezen. Brezen have been around a long time. According to tradition, in 610 A.D., a monk took a strip of dough and formed it into the shape of a child's arms folded in prayer. He then gave it as a reward to children who successfully learned their prayers. He called it a "pretiola", meaning "reward" in Latin. The pretiola became known in Germany as “Brezen” and “Brezel,” and later as “Pretzel” in America. Today, over 3 million Brezen are eaten by Bavarians daily.

Some things will always taste good to me...Love those pretzels.

Take care,
Connie
My photo is up.

This was a hard one! I was wondering what you were going to post for this. My Mommie loves soft pretzels!

love soft pretzels ... would definitely love to try this!
... and thanks for the additional info. :))

Those sound much better than the bagged pretzels here in the States. Three million a day! That's a ton of pretzels!

i like that for a snack & usually SAMs club have the cheapest one w/c is reli tasty! pretzels from where i came from is diff...it's a hard tiny one coated w/ chocolate...

This made me hungry.

Have a great day!

yummo! your making me hungry!

That pretzel looks so good - yum!

Great photo! I love those pretzels. Thanks for making me hungry :)

This is a very good representation of salty :-)

I hope you have a happy day Dragonheart <3

I know you are far away in Germany, but we are pretty close, really. I am just right over here in Virginia *waves*
I am so glad I found your bloggie

The Bavarian pretzels are a favorite here in the States but I have never heard them referred to as Breze, and I am so glad to told us how it was pronounced! Great thought for the theme salty! :)

Oooooooooooooh I LOVE those pretzels!!! I have to get one now LOL!

Thanks for stopping by my blog too!

Great choice! I love those pretzels, especially with butter on it.

Thanks for stopping by.

I didn't know the traditions or the origins of the pretzel. I would actually like the bread, soft pretzel much better than the crunchy hard ones.

Do you ever get to lick it, Dragonheart?

Now I loved those, especially with the mustard and or sometimes along with a sausage..

Really I miss Munich and Bavaria so much and hope our next trip can include this area...

Ooooh, did you get to lick the salt, Dragonheart?
I like to lick salty things!

Not The Mama said the picture made him hungry.

Ohhh thank you for teaching us about Breze. Moooommmm stay away now. Stop drooling. *She's on a low carb diet* We'll try to keep her in control. We is envious that you get to eat such a great looking salty food.

I love pretzels particularly Cinnamon pretzels. I love eating them while drinking a cold glass of lemonade.

Thanks for visiting me earlier.

Oh, this plus the Weisswurst is what my husband misses around noon, he he. I love pretzels, we are lucky there is a German bakery where we can get some and then we freeze them...Mmmm, lecker!
happy saturday!

I love pretzels! I am a big fan of breads of all kinds! But pretzels especially!

I haven't had breakfast yet and that Brezen sure looks and sounds delicious. Dragonheart, you find the neatest hunt pics. I like the tradition behind the Brezen. That is neat. Thanks for stopping by and have a great weekend.

I'm thinking of how lovely that pretzel would be warm with an lovely icy cold beer!
Thanks for sharing and visiting.
Frances

My Mom's mouth is watering, she loves those kind of pretzels!
Tara

Do you put mustard on your pretzels, Momma does....yuk!!!

Wow - we learns something new everytime we visits ya!

Have a great Saturday!

Now all I need is a good pint! Thanks for stopping by - DKM

Pretzels are a favourite around our place and I'm guessing it's because of the salty taste. Happy weekend.

I was very curious to see what salty picture you would come up with. This was a surprise, but a mouth watering one (and I'm not usually one for salty foods).

Have a lovely weekend (and don't miss the lunar eclipse tonight)

Pretzels! You kitties eat all kinds of yummy stuff. I had a nibble of Momma and Daddy's beans and cornbread the other day.

I'm tagging you for a hug -- big, warm fuzzy huggies! Come by my bloggie for details.

Wow, great history lesson to go with the photo. Thanks for stopping by.

Those are so yummy. Now I want one. We don't have them over here, I mean not in a bakery. You can get only the frozen ones - yuk!

Have a wonderful Sunday :)

We have these here in the North east US and they are served with hot melted chees to dip them in...yummmm My photo is up, please visit

My o My I would love to try a pretzel that big!!

Really good photo and choice for the theme! Those pretzels are famous for their beer over there! *S*
Happy weekend
L

What a great idea! Unfortunately, I didn't have any photogenic pretzels around. Pooh! I did try to photograph my Arby's potato cakes, but they just came out rather boring-looking. So, I had to look elsewhere... Come see! :)

Thanks for stopping by mine :)

Going through DH's blog I found the Bretzel. I never heard the word you put, must be bavarian, but the official word is "die Bretzel", die Bretzeln. I think the immigrants to America just put a P instead of the B ! lol !