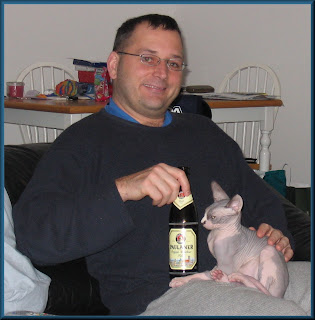 Bayern (Bavaria) is known as the "beer capital of the world" and München (Munich) is, of course, famous for the Oktoberfest celebration that takes place every September and October.

According to my humans, the breweries in Munich produce some delicious beer. In this photo, I am quite comfortable on my dad's lap, and he's stuck this bottle of beer next to me. The beer is Paulaner Helles, which is one of my mom's favourite beers here in Munich. Paulaner is the name of the brewery, and Helles is the type of beer. Some of the most popular beers in Munich are Helles (light beer, similar to North American lagers), Dunkles (dark beer), Weißbier (wheat beer), Pils (pilsner), Starkbier (heavy beer consumed during Lent) and of course, Oktoberfest (not quite as heavy as Starkbier, consumed during Oktoberfest).

I should ask hubby to try that! That's really a great photo w/ ur cat staring at the bottle of beer!

Dragonheart, I'll bet you can get some great beers where you live! And you look so tiny next to that big bottle of beer. Happy Saint Patrick's day!

Yes, it had to be beer for you this week! I didn't realise how small you are Dragonheart!

nice shot! wow, never knew there were that many kinds of beer ... quite a knowledgeable cat you are! :)
Happy St. Patrick's Day!

What a coincidence, I just had a refreshing cold bottle of beer with some friends earlier.

Great entry. Thanks for sharing.

Cool@ You always share such neat things on your blog

Who knew there was so much to know and so many different kinds of beer. You are the learned one Dragonheart.

Great Photo with your Human, and lots of information!

Great photo! My hubby used to like German Black beer and use to have one of them whenever a restaurant or bar had them. But not that much places in Hawai'i has Black Beer.

Thanks for stopping by.

There are some incredible beers in German--some are very bitter though. Thank you for sharing what your humans like.
Have a wonderful weekend.

Wow, Dragonheart, you know a lot more about beer than I do! Did you by any chance try some of that beer while it was so close to you??

Mo and The Purries said...

That's a great picture on your daddy's lap! And the beer bottle is cool, too!
I did a Green Tea for today's DRINK theme!
cheers,
Morgen
It’s A Blog Eat Blog World

OMG look at that cat!!!! I've never seen anything like it, just beautiful and so.. ancient!

I've never been fond of the taste of beer but I hear the type of beer makes a great difference.

Poor Dragonheart! You don't look too happy about that beer! You still are so darn cute!

Dragonheart I love a kitty who knows his beer.
Thanks for visiting.
May you and your humans have a wonder St. Paddy's
Frances

Hey Dragonheart, don't forget to share some of that brewski with your human!

Dragonheart, awesome picture of you, dad and the beer. Thanks for sharing your post and for visiting me.

Happy St. Patrick's Day! Stay away from the beer Dragonheart.

That bottle is bigger than you! Now THAT is a beer!

I think I'd like to try some of that! Nice choice for The Hunt. Thanks for dropping by for a visit.

Wishing you happy days ahead

Thanks for the lesson on beers!! Great photo!

Is it me or is Dragonheart turning hi nose up at this brew?

Dragonheart - thanks for visiting - nice picture!

My hubby would love all the different beers.

Love the picture. Thanks for stopping by.

Mmmmmmmmmmmm Beer! One of my friends here in Knoxville is the brewmaster for one of the local restaurant chains and it is good to be his friend!

Thanks for stopping by mine :)

Congrats, just hit my heart. 100%. After sundays training, would like to have ein Kommentar.

You are a very smart cat... and your mom took a great photo.

You are invited to check out my blog and Photo Hunters post.

i'm glad your mama gets you bottled water to drink. you'd probably better stick with that! beer can do strange things to kitties!

i do love to see pictures of you, dragonheart!

Great photo, but you don't look very happy on the picture...

oh how cute! Great pic/pick for the theme :) thanks for visiting too!

Interesting info about the different types of beer.

Dragonheart, do you mind that I'm a dog?

Cute picture. Thanks for coming by My Photo Blog.

This is very late I tried to post before but my PDA doesn't seem to let me.

Now you know you're under-age to be drinking alcohol.