140 years ago, on July 1st, Canada became a country! Today, Canadians across the country and all around the world celebrate Canada's National Holiday.

Canada Day (French: Fête du Canada) is Canada's national holiday, marking the establishment of Canada as a Dominion on July 1, 1867. It is a federal holiday celebrated on July 1, annually, by all provincial governments and most businesses across the country.

A day off from work, Canada Day is often a time for outdoor activities in the early Canadian summer. It is also Canada's main patriotic holiday and often referred to as "Canada's birthday", particularly in the popular press.

While it is the date upon which the present Canadian Constitution first came into effect, the first day of July does not commemorate a clear-cut date of "independence" or "founding". Instead, it commemorates the beginning of the establishment of the Canadian confederation through the 1867 British North America Act. The British Parliament still retained several political controls over Canada after 1867, and the country still lacked many of its modern provinces. The date represents the biggest step in the establishment of Canada as a self-governing country, and the beginning of a gradual march towards full independence from Britain, attained with the proclamation of the Constitution Act by Elizabeth II, Queen of Canada, in 1982.

If you are in Ottawa, check out all the activities going on in the National Capital Region. For the past three years, while living in Ottawa, my humans participated in the HBC Run For Canada, a 10K race.

I invite all of my friends to join me in celebrating Canada Day with these traditional Canadian foods:

Nanaimo Bars (only for the humans, as these contain chocolate) 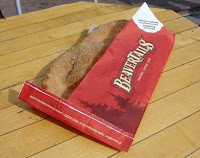 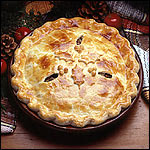 Also on hand is some fresh BC Salmon and some northern Arctic Char.

I want to wish all of my fellow Canadians a very happy Canada Day!

What an awesome tribute to our country.

I invite you to come to my blog and wish Canada a Happy Birthday.

Happy Canada Day to you!

Mhm, those meat pies look great! I think a bit of that would fit in my little tummy.
How does cats celebrate this special occasion?

Happy Canada Day to you! And thanks for letting us celebrate with you. What a great spread!

Happy Canada Day!!
mmmmh these treats, looks so yummy thanks for inviting us!
cho-co-la-te only for humans?
maybe me gets a tiny bite though?

Mom is French-Canadian. Her ancestors settled in Canada in 1640! She makes tourtiere! Her family adds leftover mashed potatoes to the pork. It is -so- good.

Happy Canada Day! MomBean thinks she has everything for the bars, maybe she'll whip some up.

Happy Canada Day. We love our neighbors to the north very very much!!
The foods look very tasty.... too bad we cannot taste them too. My mommie lovees the salmon yummmo very healthy and the beaver tails.
Thanks for inviting us to your party!!

Happy Canada Day, Dragonheart, and thanks for telling us about it. We didn't know Canada Day was so close to our Independence Day in the U.S.

Rocky
& all at Artsy Catsy

Happy Canada Day Dragonheart! Mom and dad might take a trip der dis fall...mom's been der like a zillion times and dad's been der a cuppul but der not sher if dey can go cuz I gess now dey will need passports to get in!

Happy Canada Day to you. And I love that French meat pie!

Happy Canada Day!!!
I've never been to Canada, but mine monbean has, she sez I'd like it in the summer, but it gets verrrry clod in the winter.
She sez that she used to eat beaver tails when she was a little girl at summer camp. she likes the cim-o-nin sugar ones the best.
Oh, and bestest news!! I get to have salmon stinky goodness for dinner so's I can celly-brate with you & my frineds to the north.
---Beezer

Any holiday wif good food is worth celybratin in my book! Happy Canada Day, Dragonheart! Canada is a good naybor to Whiskonsin. Purrs!

Happy Canada Day
from a couple of friends "south of the border" :)

Happy Canada Day to you too! I think I might like to get the beaverrr tail forrr my lady bean. She loves pastrrries!

Happy Canada Day! So interesting our two countries celebrate their "founding" within 4 days of each other!

I'm going for the salmon and char, mom for the chocolate....

DKM says Nanaimo Bars are the best things on the planet.

Happy Canada Day, Dragonheart!!
Thanks for inviting us over. The food looks delicious, especially the Poutine. Yummy!!! Thanks for the information about Canada. we hardly knew anything about it!!
Your FL furiends,
Samantha & Tigger

Happy Canada Day Dragonheart. That food looks yummy, mum said she'd like to come and share it too.

Happy Canada Day to you, Dragonheart and your mom and dad! Hope you had a great day today! We always learn things when we come to visit you and those Canadian foods are very interesting. Our Food Lady thinks the chocolate sounds very good and we (and our Food Lady) love salmon - yummy!

Happy Canada Day Dragonheart! It must be hard for your Mom and Dad sometimes to be away for so long! I'll be they really appreciated this tribute!

Happy Canada day to you~!