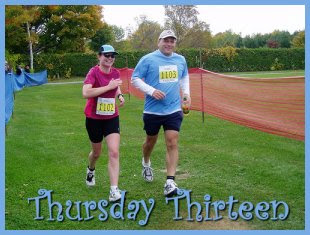 We wish your humans much success!

All the best to your humans, guys. Our mum doesn't do things like that...but she does go for a walk in the mornings with a couple of the neighbours...she says it sets her up for the rest of the day.

I learned a lot today! Please wish your Mom and Dad a lot of luck for me!

Gosh I think you need a rest now!

Alasandra, The Cats and Dogs said...

Wow, your beans must be in great shape. Good luck to them. ~S,S & C

Oh you guyz are so very lucky to have such healthy Mommas and Daddas! :)

MEGA GOOD LUCK Momma and Dadda of Merlin and Dragonheart!!!

Wishing your humans good luck in the marathon...Hugs Ariel

Good luck and drink lots of water! We're walkers over here, although, in mom's youth she was a runner..aah, for the days when 10 miles was just a warm-up!

Good luck to your Mom and Dad!

We wish them the best, too! They've been working so hard to prepare. We can't wait to hear all about it.

That was very informative, but I have decided I am not going to run a marathon. I'm tired just reading about it...

We're all sending your people the very best wishes for Sunday!

I still think your humans are insane... but good luck to them on their run!

And yea we can finally post a comment. Your blog hasn't liked us for a few days.

WOW!!! Those are some interseting facts!!

Good luck to your beans!!

Good luck to your humans! I am going to nap now.

Good luck ... that's an awful long way, and I think I'd need a few naps during the marathon if it were me.
--Jasper

Good luck to yer beans, we hopes they do furry well!

that is pawsome. our maw bean would like to run in one some day. right now her knee is twisted and she is outta commission on the couch till it heals and she can get back out poundn the pavement.

have fun!!!! remember to breth.

We wish you all the best for the marathon!

12,000? Wow! We hope you beans don't get trampled! Tell your mom that our mom is rooting for her and will be there in spirit (certainly not in the flesh!)Tell your dad we think he is so sweet running at your mom's pace.

Thanks for those great facts.

That was some pawsome information on marathons!!!!
Big Purrs to your Mom & Dad!!!
Purrs Mickey