So I was at the vet yesterday due to a rash on my backside near my tail. The vet thinks it is a scratch or something similar that became infected with bacteria. The cancer medications I'm on can make me more susceptible to infection. She prescribed an antibiotic cream with a steroid (she didn't want to give me any oral antibiotics because of my other meds unless the cream doesn't clear it up). 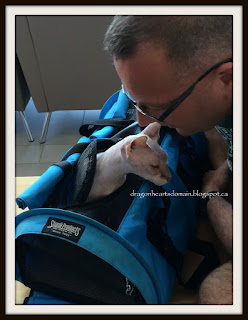 So, in order for the cream to work, it needs to stay on for 10-15 minutes, twice a day.  So last night I was isolated from my Dragonheart and Devi in the bathroom, so that they wouldn't lick the cream off of me.  I had to wear the cone of shame so that I wouldn't lick it off myself.  My mom spread the cream on the rash, while daddy held me.  Daddy then held me for most of the 15 minutes, because I really didn't like having the cone on.  I don't have any cone photos, which I think is a good thing!

So after 15 minutes, my mom wiped off the cream with a cotton pad, and all was well.  This morning,  the rash already looks like it is clearing up! 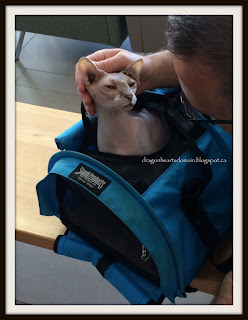 The vet also said that I look like I'm in great shape and you would never know I have cancer! I've gained 0.1 kg since February, and that's perfectly okay. I do have quite the appetite because of the prednisolone I'm on. 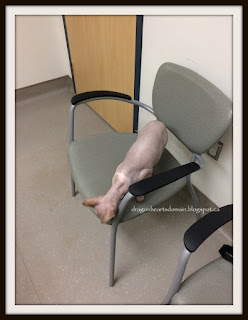 Between Dragonheart and myself, our poor mom has been to the vet with us three times this week, and our dad has been twice since he's been home!  Hopefully nothing will happen to Devi today, as we do not want to make it three-for-three on cats and four-for-five for weekdays.

Be sure to check back tomorrow as we celebrate an important milestone!

Goodness we are sorry you have a rash on your backside Merlin and hope it will go away very soon. Do be careful not to lick your antibiotic cream off as it might taste yucky.

Oh Merlin, sorry ya' have a rash, but me's glad it's gettin' better and dat you're feelin' all good and stuffs. We're sendin' purrayers.

Glad the rash is getting better and am hoping everyone can stay put!

I am glad your rash is improving with the cream, Merlin.

We're glad you're doing so great, Merlin (other than the rash!) You're dad is a great dad - spending his first week home going to the vet twice!!! We can't wait to find out what your announcement is!!

We are glad to hear that the rash is clearing up and that it is nothing more :)
We are really happy that you are doing so well too!
Purrs you all have a nice and quiet weekend.
Purrs Georgia and Julie,
Treasure and JJ

Merlin, we hope that rash clears up quickly. It's great you're doing so well.

SO happy that your rash is already improving and that you continue to do so well!

I sure am glad that your rash is getting better and it's terrific that your Daddy is home to hold you!

We're glad the rash is better. Having Daddy home is extra nice too!

Poor Merlin, I am sorry you had to go to the vet. I am glad the cream is helping though and you have your Dad home to give you extra loving.

Merlin, you ROCK - you have put on weight! Yay. Shame about the butt rash and cone but you got extra Daddy time.
Paws crossed for all of you - no more vet visits for a while please.

Going to the vet is never fun but having your dad there with you, and then having him hold you whilst the cream did its work, THAT is awesome, Merlin! We're glad to hear that you are doing so well and have even gained a little weight. Keep up the great work!