Trip to the Vet Tuesday

Hello all!  Devi here.  So, I ended up at the vet this morning.  Why?  Well, I have a rash over various parts of my body, and we are trying to figure out what it is. 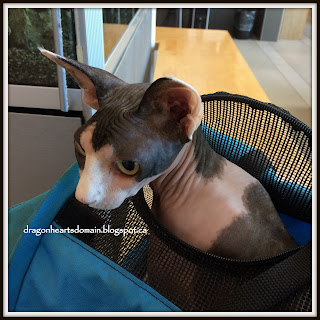 They took some swabs and samples from where I have the bumps, and they will be examined today to figure out if the rash is due to some sort of infection, either bacterial, yeast, or fungus.  The vet doesn't think it is due to a parasite, because we don't go outside and no one else is affected.  Similarly, she doesn't think it's ringworm because no one else is affected.

If the swabs all come back negative, then it's probably an allergic reaction to something, which means trying to figure out exactly what I'm allergic to!  Most likely would be something food-related, but environmental allergies are also a possibility. 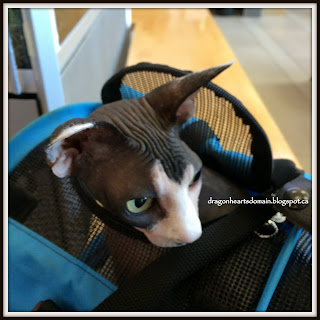 Hopefully they figure out what it is!  The rash doesn't appear to bother me - it doesn't hurt when the bumps are touched, and I'm not scratching at them, but it sure doesn't look very nice!

They tried to bribe me at the vet with some treats and Cheez Whiz.  I liked the treats, but not the Cheez Whiz (silly Merlin loves the Cheez Whiz).  I did step in the Cheez Whiz, though, so here I am cleaning it off of my paw. 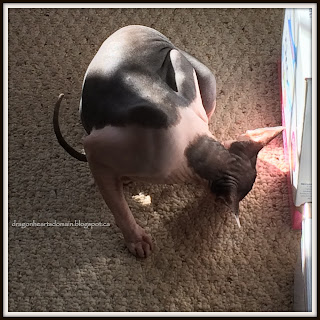 We will keep you updated to let you know what's going on!  And we will have the results of Dragonheart's birthday contest for you on Thursday!
at 09:05
Email ThisBlogThis!Share to TwitterShare to FacebookShare to Pinterest
Labels: Devi, Vet Trip

I'm sorry that you have a rash that landed you at the vet, Devi. Hopefully they'll be able to find a simple cause and give you a quick and easy fix. I am glad that it's not bothering you, though!

Last summer, I came home for lunch one day to find my girl Thimble's ears and face all red and swollen. She was whisked off to the vet, where they deemed it an allergic reaction to something she must have come in contact with. I had just mowed the night before, and the vet was wondering if perhaps I had stirred up some pollen or other airborne allergen that Thimble reacted to. Given how swollen her poor little face was, she was given a benadryl injection, and then she had to take steroids for a couple of weeks.

Oh no - a rash. We hope that it can be identified soon and sorted. It is great it is not bothering you. Now Äiti is curious and wonders if it's possible to see a close up picture ? She's very nosey like that and she's always looking out for tuff on Veikko especially as he has chin pimples often!

But paws are crossed big time.

We're sorry to hear about that rash that appeared out of nowhere Devi. Hopefully your vet will be able to prescribe something to make you feel much better and we are sending lots of purrs to you in the hope you will soon be better.

We are sorry to hear that you have a nasty rash right now. We hope the cause can be found and treated easily! We are sorry we haven't been around to visit lately. We haven't been posting on our site or visiting much lately, but we plan on changing that soon.

Do you think it might be contact related? New laundry detergent, fabric softener, air freshener , plants in the house, skin or scented lotion that your Mum may apply and then touch you? Perfume or body spray , air conditioner filters with lots of trapped pollen? Our Mum tried switching to Persil detergent but it gave her and our brother,who has sparse hair on his tummy , a rash.
Another time, one of us got a new 100% wool blankie that produced an almost sunburn like rash. We hope you an discover the source. By the way, you are a totally adorable kitty.

Sorry you had to go to the vet. I hope they figure out the cause.

Sorry to hear about your rash, Devi. Summer seems to be a bad time for these things. We hope they can figure things out and get rid of it pronto.

Oh no, sorry you have a rash and bumpys. We sure hope they figger it out soon and can help ya. We's never had cheez whiz, but mommy says it's fake cheese so we can't magine it would be good. MOL

Rash, nasty looking thing on nakkeds, but luckily it's not itching on Devi! Yeast, bacteria and fungus are infectious, do I presume it's not those. Kibbles / dry food arrethe most common cause I've heard for the skin problems of this breed.

poor sweetie! Hope they find out what it is soon and that it is something that is easily treatable catchatwithcarenandcody

We sure hope you get rid of that pesky rash soon!

I hope the vet can find out what has caused your rash, and it is quickly cleared up, Devi.

We hope you feel better soon!!

Poor baby! I sure hope you're feeling better soon.

I've had a bit of a rash on my back, Devi...just a small area. Mine kinda itched, but not real bad. The mom took me to the vet who, just like yours, thinks it may be some type of infection...or maybe an allergic reaction. I do have allergies. So they gave me some medicines to take and it's starting to go away. I hope yours does too. Keep me posted. ~Ernie

Devi, we purr that rash is not serious and will go away quickly.
Purrs Georgia and Julie,
Treasure and JJ