Hello all!  Devi here!  We are excited today because our dad comes home tonight!  Yay!  And we won't be separated any longer, except for short trips he'll have to make in his new position. 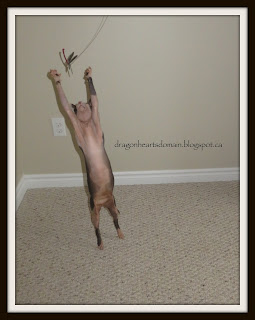 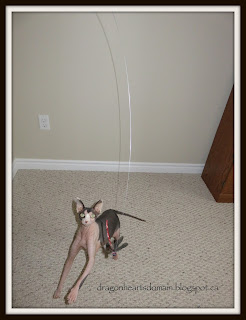 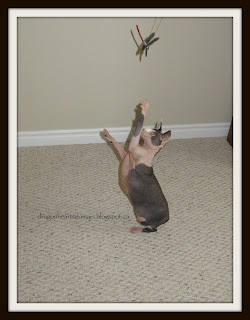 Sunday we move into a hotel again, and then we'll be in hotels until October 14th, at the very least, because the closing date on our new home in our new city is October 13th.  The boys have lived in hotels for that long before, when they moved from Germany back to Canada.  We don't think I've ever done that, so it will be a new experience for me!

So some of you read on Merlin's Facebook page that we might be getting a new sister in the new year.  Yes, it's true.  You see, before I came along, when the boys weren't blogging any more, they had a little sister named Arwen.  We haven't talked about her yet because our mom still gets really teary eyed thinking about her.  You see, they lost Arwen when she was 2.5 years old, in January 2015, to Feline Infectious Peritonitis.  But Arwen came from a very good breeder who has a health guarantee on all her kittens for five years, and after she removed Arwen's parents from her breeding lines, she offered up a new kitten whenever our humans were ready.  Well, before that happened, our humans met me, a Sphynx in need of a new home, and so they rescued me.  Of course, the offer for the new kitten was still open.  We were going to get a new little sister in November of this year, but the litter that the breeder had that would have been 4 months old in November didn't have any tortoiseshells or calicos in it, and our mom is holding out for one of those, don't ask me why!  The breeder anticipates some torties or calicos in her next litter, though, and the kittens from that litter would be old enough in January to come to their new homes, so that's when we might get a new family member.  Another Sphynx, because our dad is allergic to furred cats.

We will post more about her sometime when our mom can afford to get very weepy and teary-eyed.  She was a very special little girl.  You can read some of her story here.  Our mom is already crying just writing this.
at 10:18
Email ThisBlogThis!Share to TwitterShare to FacebookShare to Pinterest
Labels: Devi, Frootbat Friday, My humans

Devi, those are fantastic action shots of you! You are quite the athlete. I am so glad that you will all be together now, and that you'll be moving to your new home before you know it!

Thank you for sharing with us the story of Arwen. She was so gorgeous, and clearly so well-loved. I know it makes you sad to think of her, but please also know that there's certainly no doubt that you gave her the best life full of love any kitty could ask for. Arwen will always be with you and watching over you.

What's more, Arwen would surely be so glad to know that another kitty will soon be getting to know the love that she did. We cannot wait to meet this new kitty once she arrives. (We also just want to say that we love calicoes and torties around here!)

Purrs to you all!

Thank you for telling us about Arwen - she must have been a very special lady cat. We hope you will be OK in the hotels before your new home is ready for you. We are sending extra purrs to your Mom.

Those are great pictures, Devi! How exciting that your dad is coming home! Arwen was a beauty. Hugs to your mom.

Wonderful action shots, Devi ! We're very happy to hear that your dad is going to stay with you. Arlen was beautiful. We're looking forward to meeting your new sister, and to seeing your new home. Purrs

Thank you for sharing Arwen with us. We look forward to hearing more about your new sister! Have a good, high-flying weekend!

You have some amazing moves!

We hope that your hotel stays go well and you move safely into your new home in October, ALL of you!

And we are very excited about a new sister for you.

Arwen was beautiful, and it is very sad that she died so young.
You have very athletic moves, Devi.

Aaaaaaaw We know ya'll are happy to see your daddy again, and all be together. Good luck with da motel livin'. Me did it with mommy and sis Lexi when our 'pawrtment was bein' refurbished after da big flood. It was okay, but there really ain't no place like home. MOL

Arwen was very bootyful. we're sorry fur da loss and sendin' big hugs to your mommy. We look furward to meetin' your new sisfur. Have a great weekend.

Great photos Devi! We understand how hard it is to lose a love so young. Hugs.

Arwen was beautiful, I am so sorry she left so young. XO

Arwen was lovely. Mom lost her first Birman, Uriel, to FIP. It's a horrible disease. (((hugs)))

(((hugs))) to your Mom and great news about Daddy coming home! catchatwithcarenandcody

We are delighted that you are never going to be far from Daddy again, although we know this time of change is pretty darn disruptive and we are amazed how patient you are being with it all. But then Äiti says I am less easy going and peemail at every opportunity - I could apparently learn about being chilled from you lot. Pöh.
And Devi, you better enjoy that toy hogging as long as you can because if you are getting a little sister you do not stand a chance ! Especially a tortie or calico - you boys won't know what's hit you!!! A nekkid with tortitude ?! !!!

We thank you for sharing the story of Arwen. *sob* Gone far, far too young.

We love to see your stretched full out, Devi! So sad about Arwen. Mom knows what its like to get teary eyed over a lost baby. But happy news about a new little sister! We can't what to meet her when the time is right!!