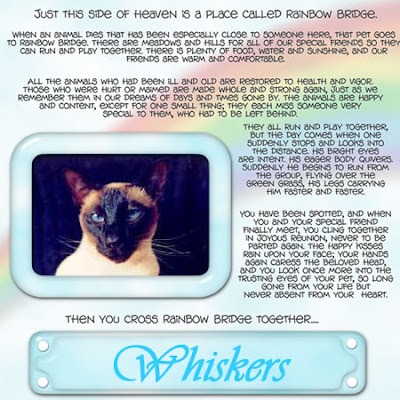 Dragonheart's mom here, borrowing his blog to remember the one who came before him, Whiskers. A year ago today (September 1st), Whiskers went to the Rainbow Bridge. He was 19 years old and died of kidney failure. He would have been 20 in November.

I received Whiskers as a birthday gift for my 15th birthday. He was the best birthday present ever. When we went to the breeder to pick him up, I had the choice between him and his brother. I chose Whiskers because he was friendly and curious - he came right out to me and sniffed my hand, and let me pet him. He then started purring.

Whiskers acquired his rather uncreative name due to the fact that he was missing the whiskers on one side of his face when we picked him up. They had been bitten off while wrestling with his brother. The name Whiskers suited him, and so it stuck, although he was often called "Whiskey." Whiskers was a Seal Point, although his front paw pads were the wrong colour for a Seal Point - they were too pale. But his back paw pads were the dark brown/black of a Seal Point, as was his nose. Whiskers had the most amazing, gorgeous blue eyes. The photos don't do them justice. They were a deep, intense blue, and just amazing.

When we brought Whiskers home there was another cat living with us, my sister's cat, Princess. We had had her for about 8 months. Whiskers and Princess became friends, and it was very clear that Whiskers was my cat and Princess was hers.

Whiskers was a wonderful, friendly guy. He loved people and delighted in being the centre of attention. He loved cuddling up on a lap (especially mine), and being pet. He had a wonderful, loud, rumbling purr, as well as the "typical" loud Siamese voice. He slept with me at night. When he was a kitten, he liked sleeping on my pillow, curled up on my shoulder-length hair. In the winter, he loved curling up under the covers, at my chest or behind the crook of my knees.

When he was a few years old, we almost lost Whiskers. He swallowed a needle. Fortunately, it lodged sideways in his throat, and I easily felt a weird lump there. The vet was able to remove it surgically, and Whiskers had no more health problems (other than the plaque build-up on his teeth that is common in Siamese) until he was in his late teens and developed kidney disease.

Whiskers was a wonderful companion. When I fractured the L2 vertebra in my back (I fell off a horse while jumping) and was confined to bed rest for a couple of months, he was my constant companion, keeping me company through the long days, and entertaining me with his antics. He loved playing with drinking straws, especially the bendy kind. When I recovered from my back injury, I switched universities, and ended up moving away from home. Sadly, I couldn't bring Whiskers with me to the University Residence, so he stayed at home with my parents, my sister, and Princess, my sister's cat.

Every time I came home from university, he was there. Ready to purr for me, sleep with me, and play. When I graduated from university, and moved into a place of my own, we decided that at that point, since Whiskers and Princess were starting to get old, and had spent almost their entire lives together, it would be cruel to separate them, so they stayed with my sister and brother-in-law. Fortunately, they lived in the same city, and so I was still able to see Whiskers frequently.

Last summer, my husband and I moved to Germany. As most of you know, Dragonheart's "dad" - my husband - is an officer in the Canadian Forces, and we were posted to Munich for three years. I knew Whiskers probably wouldn't still be alive when we moved back to Canada in three years time. He was 19 years old, he had kidney disease, and he missed Princess, who had gone to the Rainbow Bridge about 6 months earlier. So I sad my goodbyes to him before we left, spending a lot of time petting him, hearing his wonderful purr with him curled up in my lap.

A year ago today, I received the phone call that I knew would come some day. Whiskers had gone to the Rainbow Bridge.

As a tribute to Whiskers, I commissioned a painting of him by my very talented friend, Michelle Wiebe. You can see the painting here, and read more about Whiskers here or here.

I still miss my darling Whiskers, some days more than others. Sometimes when I visit Latte's blog, I get a little misty, because there are certain photos or poses that Latte strikes that remind me a lot of Whiskers. Fortunately, the immediate pain and sorrow of his loss has passed, and I remember all the wonderful times we had together. I also have Dragonheart, who is even more friendly and cuddly than Whiskers was (which is amazing!) and we we hopefully have a little brother or sister for Dragonheart by Christmas (I'm waiting for news from Dragonheart's breeder on her next litter of kittens.)

Whiskers was a very special cat, and he will never be forgotten. I miss him and I still love him. He will always have a very special place in my heart.

Tags: Whiskers, Siamese, Meezer,
at 02:31
Email ThisBlogThis!Share to TwitterShare to FacebookShare to Pinterest
Labels: In Memoriam, Other cats

What a wonderful tribute to a wonderful cat. I'm sorry you had to hear of his passing in a phone call, but you had many lovely years together, and love can reach across great distances. The painting of him is so beautiful.

I'll bet Dragonheart will love having a new brother or sister!

That is a very touching tribute to Whiskers. I am so honored to know about.

They will all live in our hearts.

That brought back the heartache of losing Oscar...it's three months ago now.

But that was a lovely tribute to Whiskers. I used to have a lovely big black cat called Whiskey when I was 17.

thank you for tellungus about Whiskers, he sounds like he was such a beautiful meezer - he is certainly very handsome! my meowmie has tow things in common with you in this post - she also had a cat called Whiskers - a tabby cat which she bought with her pocket money for 95p when she was 7 years old - he lived to 20 years. she also had another cat called Banshee (a Tuxie) who swallowed a needle much like your Whiskers...i hope you have a day full of lovely warm memories today xxxx

Such a wonderful story. thanks for sharing with us. He was a very special cat (as all of our soulmates seem in their verry own way).
hugs n kisses

Whiskers sure seems like a very wonderful cat. Thanks for telling us all about him; you made him come to life in my mind.

We love this tribute to Whiskers! My Mom totally understands all these feelings your Mom expressed. I am thankful that you were with her, Dragonheart, when she received the news. I bet that made a tiny bit easier. Losing someone is so hard, and remembering can be hard, too. But remembering is what makes them so special...even when they are gone.
Purrs to you my love & to your Mama, too!!!
Stella

What a beautiful tribute. He was so beautiful. You're a wonderful person to love and care so much for your pets!!

DH's mom,
Thanks for telling Whisker's story. It was great to read about how much he loved you and how much you loved him!

Whiskers sounds like an amazing kittty!! What a beautiful tribute and we feel like we really got to know him. He sure was gorgeous - and those eyes - wow! Sounds like you two had a very special bond indeed. Extra purrs coming your way...
Purrs,
Mr. Chen & Ollie

So sorry about Whiskers. Lovely tribute and beautiful memories.

awww Whiskers was a great Meezer!! you were so lucky to have each other.

We read this twice... it was so beautiful. It is nice to remember those we loved so much that is really does still hurt.

Whiskers was a beauty. Mommie never had a simeeeez kitty, but she had a burrrmeeez. She cried a lot when Emil died. She says he was the best kitty ever... she had him when she was a single working girl. He was her one and only <3

With cats around me for 50 years - I know exactly what this is about.
I've learned (or teached my self) to enjoy the cat(s) you have present and give them a good life on planet Earth.

Some drops from my eyes - can't help it

What a lovely tribute to Whiskers. He sounds like a wonderful guy. Hugs and purrs to you guys.

That was a lovely tribute to Whiskers. You have done him proud. I had a tear in my eye (well several actually) as I read it, and it made me think of all the cats I have loved and who have gone on over the Bridge.

Whiskers was a beautiful cat. He sounds like a great companion. It was nice to read your great tribute to him. "Very touching," the Investor says.

Thank you for sharing Whiskers with us! What a wonderful and beautiful kitty, and so very loved. And that painting of him -- wow! Just gorgeous!

What a sweetie Whiskers was. Thanks so much for sharing his story.

What a beautiful kitty Whiskers was! Thank you for sharing him with us and for letting us get to know him through you. That was a lovely tribute, and the painting of him is just breathtaking.

I look forward to Dragonheart getting a sibling! Dragonheart is such a sweet and fun kittyboy, I just know he'll be a wonderful big brother.

That was very lovely. This has been a weekend for remembering all our lost friends and those that came before. They will always be with us.

Whiskers was indeed a wonderful cat.

This is a great tribute to your friend and companion. I hope Whiskers is happy where he is right now.

Thank you for sharing your memories of Whiskers with us. He was a very special kitty and you wrote a great memorial to him. I feel like I know him a bit now.

What a lovley tribute to Whiskers. He was a gorgeous cat and sounds very loving too. That painting is wonderful. What a talented artist your friend is! Thank you for sharing Whiskey with us all. He had a good life.

Oh what a lovely tribute. Meowmy had to say good bye to her first pet, Jo Jo, a parakeet and he died while she was away and it really devestated her.

I actually was just thinking of Whiskers while Meowmy was looking at me. I was sitting just like the portrait of Whiskers and Meowmy remembered it was the anniversary of his going to the bridge.

I'm sorry I make your mom teary but remind her that I am NOT as friendly as Whiskers as my purr is very quiet and I don't like to be touched. I do like laps every now and then though.

What a special cat and wonderful story.