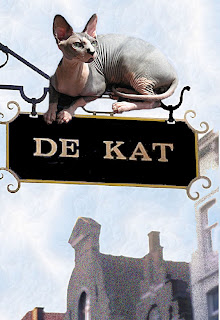 German reunification occurred on 3 October 1990, when the areas of the former German Democratic Republic (East Germany) were incorporated into the Federal Republic of Germany (West Germany) to create the country known as Germany (Deutschland).

Thanks to Zoolatry for the great graphic to the right! Although the German word for cat, is Die Katze, I think their graphic looks very German!

Update on me: Since today is a holiday, everything is closed, including vet's offices! They still didn't have the lab results back (I guess everything is slow because it's a holiday week) but I am acting normally and my trips to the litterbox are mostly normal (just soft and stinky). I do go back to the vet tomorrow, and I may need to have my anal sacs emptied, since I am still scooting my bum across the futon. I have been taking my pills like a good boy, and I take my last one tomorrow. Thanks again for all your purrs, prayers and good wishes. I can't tell you how much they are appreciated!

The maid just said: What would I do without Dragonheart! Because she totally forgot about the German holiday. And now understands why she couldn't reach anybody at the German registry office that she tried to call....
That is a great sign, even if it's not in German, doesn't matter!
As you don't mention anything I assume your blood results are all good?
Karl

Happy German Unity Day, happy relax holiday~!
I am glad that your litterbox condition is better~!!!! I hope you will get good news from lab, and good luck to the vet tomorrow, I am praying for you still of course~!

Happy German Unity Day! You look very cute sitting on that street sign. I am glad you are feeling better, and hope your bloods come back good.

Brother dear...please read my comment on your mancat monday post. there might be some help with the right German words there for you. Good luck with the Vets!
Lots of love.....Peachy

I forgot to say that DE KAT is the coolest graphic I have seen yet from Ann! Love how you look in it!
Peachy

Have a great holiday!

That's a great picture of you on the sign.
Have a happy holiday.

Yippie. We are just glaad that there is some improvement going on here.
Mommie says she believe it could also be those sacs, so we hope hyou can get that little problem cleared up soon!

Happy German Unity Day!
We like that graphic even though it is spelled incorrectly :-D

Take this holoday as an opportunity to gain cuddle time! It won't be long before tomorrow comes and hopefully your results will be ready. It's so stressful to wait.

Happy Reunification Day!
it's good thet you feel bettrt.It's no fun having problems down "there"
I had a small problem once.
Purrs

That is a very nice holiday to celebrate. The LL remembers reunification well. Sorry about the poos still being stinky and loose (mine still are too).

Dragonheart that is a wonderful picture of you on the sign. Very interesting to learn about the german holiday. I can't believe it was only 1990 when East and West were united...crikey, time flies. x

Glad you are feeling better!

That is a great picture of you, DH. You look so regal. I'm glad you're feeling better and taking your pills well. You are such a well behaved mancat!
Have a great German Unity Day!

Happy "Unity Day", I think ;).
I really liked East Berlin and old East German architecture when I visited in 2000.

"Katze" is very close to the yiddish "Katz" - I often use the diminutive form "ketzela" (kitten) for Luna.

That is a cool picture of you on the sign Dragonheart. Happy German Unity Day!

That is a great photo of you Dragonheart!

I'm glad you are starting to feel better. We will be glad when the wait is over on those lab results!

I am ashamed I didn't think at all that there is a holiday today in Germany. I am in Belgium such a long time that I only realize it because the TV program is not "normal" and the day has changed too before it was June 17. I am curious to see the test results !

Happy German Unity Day!!
I have tagged you a very simple and fun meme, please come and see.

Happy howiday!
I hopes your test wesults will be ok tomowwow!
sending you wots of purrs....

DH & family, happy German Unity Day! We think we are going to tell the younger girl bean about your blog because she is taking German in HS and your blog has very interesting cultural info about Germany!

Hi Dragonheart. I am very happy to hear you are feeling so much better. Are you scooting your bum across the futon because you don't want to lick it clean with all that soft & sticky mess there? I hope not, haha.

Anyway, because you are such an eggseptional cat and blogger, I'm giving you The Egel Nest Blog Award. Come get it at my blog.

I hope your test results are back soon.

Happy Holidays to you.

I'm glad you are feeling better! I like the picture; De Kat is Dutch. :-)

We Ballicai are still purrin' fur you, Dragonheart! But we're glad you're feelin' good.

That pickshure of you is really kool -- you look so handsum, as alwayz. And I just love Maggy and Zooey's photo-portrits!

Hope you have a good Unity Day Dragonheart - what an amazing day it was when the wall came down! my Mum can remember it very well.

Dragonheart all the cats have written you!! But this is Grams and she wants you to know that Kelly has posted pictures of our 2 kitty cats Myrtle and Zeek.... go to my side bar and the first person on the list is caregivers diary and you can get to Kelly's blog from there and see Zeek and make a new friend!!
I hope you are feeling better!! Grams

Dragonheart, I tagged you for a meme. Come to my blog and visit!

I absolutely love the photo. I wonder if we can but a sign like tht, with a cat on top!

They did that to me once... the vet has a nice scar to remember the visit!

We hope that you had a very nice German Unity Day and Oktoberfest! Also, we're hoping you are all better soon! We've had trouble getting to the computer because no one stays here long enough to help us blog and visit lately! Hopefully that's done now!

Just wanted to say that I love German Unity day as it is brilliant and I have written about it on my Berlin vaction blog.