Merlin: Tripper; Pearl, Bert & Jake; and Artsy Catsy tagged Merlin for the 7 Random/Weird Things About Me Meme. So here are 7 Things about me, Merlin. 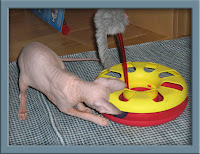 Merlin & Dragonheart's Mom: Thanks to everyone for the feeding suggestions yesterday. We've tried most of the suggestions. As we said yesterday, we've tried feeding them in separate rooms, but Merlin just throws himself against the door to the kitten nursery, and Dragonheart stands outside the kitten nursery and meows.= Putting them on either side of the door, but able to see each other, doesn't work, because they just stand at the door and meow. Putting Dragonheart up on a table or counter doesn't work - he just jumps down. Feeding them in the same room, but slightly separated doesn't work, because they just switch spots, and eat the wrong food, no matter how hard we try to herd them to the correct food. You would think that if they are hungry, they'll eat the food that's in front of them, but so far that hasn't seemed to work. It's very sweet that the boys are already inseparable, but it sure makes feeding them a pain!

I am so touching that Merlin and Dragonheart couldn't seperate to each other, they are really really close~!!!!! That is a good news~~!!!

And I am very happy to learn you more, Merlin~!!! You are so adorable~!

I just updated myself I somewhat missed that DH has been so sick ! and fortunately here are good news he seems to be almost back to normal. You both look so cute and your mom and dad were so lucky that Merlin has such a sweet and affectionated character. Of course it is a big problem that you don't want to eat separated. Maybe try to feed one in the bedroom and one in the living room just another place as they usually use. But really I don't see any real solution either. That's a big problem.
Maybe something comes later into my mind.

Merlin, you sure sound like a sweet and affectionate little kitty!

Merlin you are sweet and we enjoyed learning some new facts about you. It is lovely that you both get on so well right away.

Merlin, you sound as if you are the perfect brother for Dragonheart!

Isis Mum here as we have the same sort of issues all 3 cats have different diets, Tigs on Rx food, Ramses on regular food and Isis on kitten food (especially now she's probably pregnant). Each cat has their own bowl and a place at the feeding mat and I feed them always in the same order. I make up all the bowls and place Tigs and Isis bowls down first and them Ramses goes between them as it's not so bad for him to have a little of Isis or Tigs food. Then I stand over them and to start I had to keep rearranging them constantly! Now 6 months on they mostly keep to their own bowls, though Isis does like to have a little sample of Ramses and vice versa it's kept to a minimum. So find what works kinda ok and watch them and put them back in front of the bowl they should be feeding from repeatedly if necessary. Stick to it and before long they'll have the message and pretty much keep to it! :)

You probably have no furs on your ears because Dragonheart groomed them all off!

It's good to hear you two are getting along so well.

Merlin, it's cute that you bounce. And I definitely approve of #5. hee hee

Merlin,you are such a cutie pie :)
A purr machine too.It's so nice to see how quickly you have integrated into the family.Lots of toys and a brother ,woot!
Purrs Mickey


I do not remember all the suggestions. How about feeding in crates(PTU)in the same room?

Merlin..Yoo arr too cyoot. I dunno bowt da frowin yurself at da door ting doh. Dat sownds hurty to me. But I noes Dragonheart can teech yoo to use da cyootness to gets da gud tweats and scritches. An dunna wurry bowt da eatin stuff. Dat will wurk owt soons.

How cute, a pair of love bugs!

Merlin! I think we must be brother and sister because I am so much like you!!

You are so cute Merlin!

Welcome Merlin! It's very nice to meet you.
It looks like your big brother Dragonheart loves you very much. That is fantastic!
Love

Nice to get to know you a bit better, Merlin! Dragonheart must be very happy to have you as a little brother. I'm sorry to hear he's been ill, please give him an extra cuddle!
In my COT I share pics of Freyja & Bastet with the dogs.

It is so sweet that you both like each other so much.

My human is laughing at all the problems with feeding them. She had that for awhile but ended up giving up--Georgia got kitten food for awhile and then Gemini was switched to adult food pretty early on, but regular adult food, not senior!

It's great to learn more about you, Merlin.
Especially that you and Dragonheart are becoming inseperable!

It's wonderful to learn more about you, Merlin!

It is great that you and Dragonheart already love each other so much. I feel kind of bad for your parents, though, trying to figure out how to feed you.

Merlin, that is so cute that you eat animal crackers! And it is so sweet that you love your brother so much already!

Mom-maybe you will have to hold one of them while the other eats, do this for awhile and then slowly let them both start eating at the same time, but at different food stations.

I'll be very excited to find out what you finally figure out, feeding-wise.

Merlin, you are such a babydoll. I know that Dragonheart and your humans are so happy to have something as sweet as you in their lives. I love a kitty that will purr and share your love. And cuddle bunnies are great too.

I may see if any of my babies would like animal crackers as a treat.

Mommy was thinkin of gettin a Sphynx kitty afore she gotted me cause she is allergic to kitties but she get shots once a month so that my kitty furs don't bother her. You are such cute kitties, I hope Dragonheart gets better.

Oh oh, we think maybe Dragonheart licked all the fur off yoor ears!

Merlin is tooooo adorable, and this was such a fun read. Happy COT!

Oh Merlin you are a cutie! So nice that you boys already love eachother. Sure wish I could say the same for Sultanfus and Guy.

Merlin you are so cute ! The 7 things are funny to read.
I try to feed the cats separate since month because of Friedas diet. But it is not possible for me.
That´s hard with more than one cat.
Good luck !

We forget to tell you we like the new layout and find it easier to read than the last one. We use Mozilla Firefox and, for some reason, your old layout just never looked right.

Keep the new one!

Merlin, those are some great things to know about you!
We are very glad that you two love each other so much, but you are making things difficult for your humans aren't you! GOOD JOB!! hee hee.
The only thing mommy can suggest is to feed smaller amounts more often during the day so that they finish their food in just a couple of bites instead of playing "cruise the buffet"

I have no idea how to solve the feeding challenge. Maybe food that is good for them both (like fresh (white) fish)will do---

It's nice to learn even more about you, Merlin :-) You look so little snuggling up next to your Daddy.

Hey! Mom LOVES the new header picture. She keeps going back to look at it! :)

What a fun little kitten you are! I'd love to play with you. I've got the same purring, playing, bouncing of the walls thing going on myownself.
Rascal

We're all furry glad Dragonheart is doing better. Purrs & love from us!

Oh, Merlin, we just love you and Dragonheart! You are such unique and fine kitties, and we don't think anything about you is weird ... well, except, you have a scrotum? I heard I used to have one, but it seems rather purposeless now.

It was great getting to learn some new things about you! We hope that soon you both will be able to eat the same food so the bowl swapping won't be an issue. We had a similar migratory eating issue here in that Padre is a full-grown cat while Meerkat and Panda Bear are kittens. Mom and Dad eventually gave up trying to give us separate foods once the kittes were about six months old.

Awwwwwww! That is just so preshus, how close you and Dragonheart have beckome, Merlin! You are such wunnerful and loving bruthers.

And I loved readin yur meme, Merlin! It was fun to find out more about you. You sound like such an adorable, preshus little feller -- and what a purrer you are! I purr, but I have a furry quiet purr. The quietest purr of all the Ballicai! And my MAO is just the opposite. I MAO MAO MAO furry loud!

Animal Crackers are yummy. We don't get those too often, but we agree. We will sometimes eat goldfish crackers, but we really just like to lick the salt off, except Camie, but she gets in trouble because she finds the bag when Mom hides it and eats too much.

And your beans were worried that you two wouldn't get along.

We've been eatin the same food together (an trading bowls) fer so long that we don't know. So we ast The Big Thing. He said a Bein should sit down on the floor wif yer bowls on opposite paws... As long as ya eat most of yer right food that way it should be OK.

He says he did that when we were kittens an Tinkerbelle The Cat-Who-Came-Before was old he hadda do that.

An it's nice bein head-scritched while ya eat. We 'member that part cause sometimes he still does that.

Congratulations on your new little brother Merlin, he is so lovely!

I have been away from COT for a while. I was wondering if the new little one would be here when I got back.

I am so happy to see that they are such good buddies already. Sorry about the feeding issues though. That's a tough one.

Ha, ha, ha, two cats and feeding problems. Ya should contact Opus and Roscoe as they have kinda the eating thingie. I am so glad that Dragonheart is feeling better, I Merlin is too. Stop on over cause I have a surprise for Dragonheart.

Hi Merlin,
It is so great to get to know you better - we loved reading your seven things!! And, we are sooooooo happy to hear that your brother Dragonheart is doing better now.
Purrs,
Mr. Chen & Ollie

Merlin, you are a precious little fellow, and I enjoyed reading your Seven Things Meme! And what a wonderful brother duo you and Dragonheart are. You two are just purrfect!

Purrs and snuggles from Marilyn!

Oh Merlin, it is great to know more about you. I can see you are a snugglebunny. What a sweetie.

I wish your beans luck getting you to eat the right foods. Maybe you just need to settle in and know that you won't be seperated from each other forever.